Like most Mancunians, I feel there’s a lot to love about my city, but even I was surprised when it was announced that the world premiere of Back to the Future – The Musical would open at Manchester’s Opera House. I grew up in the 80s and this is one of my all-time favourite films, so I was bowled over when my wife and daughters bought me tickets to the show for Christmas.

Before delving into the detail, let me say this: You’ve probably watched the film on VHS or TV or DVD dozens of times, but if you’re an 80s kid like me (I’m the same age as Marty McFly), sitting in the theatre watching this incredible spectacle unfold, you’ll be transported right back to the first time that you saw the film in the cinema, in the pre-multiplex era. Yes, it’s like you and the rest of the audience are in a collective time machine – the show is THAT good, and I’m pretty sure that there will be a few jaws well and truly dropped. This is entertainment on an epic scale, and I’m still buzzing the day after the show.

Of course, the key to a good adaptation – usually a book to film, but in this case film to stage – is some well-written source material featuring great characters that tell an engrossing story, and in that regard, you’d struggle to beat the Back to the Future screenplay. It helps that the film’s original writers, Robert Zemeckis and Bob Gale, have also written the musical. Original composer Alan Silvestri is on board with lyrics by American songwriter Glen Ballard.

In case you’ve been living under a rock for the past 35 years, Back to the Future tells the story of teenager Marty McFly who, in 1985, travels back in time to 1955 in a time machine built by his scientist friend, Doc Brown. The problem is that when he gets there, Marty interacts with his mum and dad before they meet, and in doing so, the Doc tells him that he’s messed with the space-time continuum and that he and his siblings might be erased from history! Together, they hatch a plan to make sure his parents meet and to send Marty back to the future. 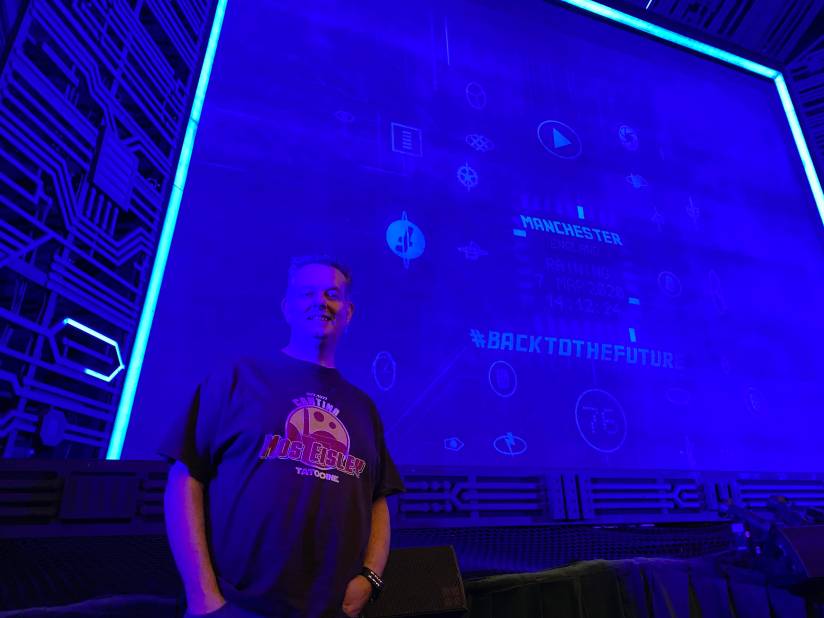 The stage show is a faithful adaptation of the film, so you don’t have to worry about your childhood being spoiled. Yes, there are subtle changes here and there – there’s no Einstein the dog, Doc doesn’t do a shady deal with Libyan terrorists, Darth Vader doesn’t threaten to melt George’s brain – but the nuts and bolts of the story arc are intact, and the script covers the familiar beats of Marty’s trip to 1955 and his return to 1985. Iconic songs ‘The Power of Love’, ‘Johnny B.Goode’ and ‘Back in Time’ are bolstered by an enjoyable collection of musical numbers whose crafty lyrics play with some of the familiar classic dialogue from the film – “Hello – Is Anybody Home?” performed by Marty and his parents being an early highlight. The new songs, along with some well-placed subtle changes, gags, physical set pieces and dance routines, keep the show zipping along at a cracking pace.

There’s a lot to love about this musical, but I’m going to pick out some highlights. First off, I’ve already said that it’s a faithful adaptation of the film, and it’s great to hear the terrific cast working their way through the classic dialogue. If you’re a fan of the film and I mention just a few choice soundbites, then you’ll get the idea. “Hello? Anybody home? Think, McFly!”, “Don’t be so gullible, McFly”, “You built a time machine out of a DeLorean?” “He’s a peeping Tom!” and of course “1.21 gigawatts!”

Whilst we’re on the subject of the cast, they were all terrific. Marty (Olly Dobson), George (Hugh Coles) and Lorraine (Rosanna Hyland) looked like they’d just stepped straight off the screen. I was gobsmacked when I found out that Olly Dobson was English. Sure, any half-decent actor can do a passable American accent, but when he delivers his lines, you will believe that you’re watching Michael J.Fox up on the stage. The inflection that he put in his delivery was uncanny and the subtle touches like the constant scratching of his hair and neck add to the authenticity. Tony Award-winning actor Roger Bart was brilliant as the eccentric Doc Brown, Aidan Cutler suitably menacing as Biff Tannen and Cedric Neal, playing the parts of both Goldie Wilson and Marvin Berry, showed that he is a first-class singer as well as actor.

But for me, the aforementioned Hugh Coles as George McFly was the best of the lot. Not only did he nail the voice of Marty’s insecure father, but he also played the part to perfection physically, right down to the goofy laugh and awkward mannerisms, using every inch of his wiry frame to become George McFly.

Finally, there’s the DeLorean car. It’s a key part of the film that’s just as important as most of the cast members. Well, don’t worry because it features heavily in a production design that’s as good as any stage set that I’ve seen. I was so engrossed in the story that I wasn’t even thinking about when it would first appear and then BAM! – it spins onto the stage and out steps Doc Brown. An absolutely incredible moment that’s only a taster of things to come. Marty’s trips to the past and back to the future feature an exhilarating mix of the car moving on stage plus back projection and lighting that at times make you feel like you’re in a ride at a Disney theme park. I don’t want to give the end away, but all I’ll say is: “Roads? Where we’re going, we don’t need roads!” Doc Brown’s workshop is one of the many beautifully rendered sets, the flux capacitor features in all its glory and one of the scenes deserves a special mention. By the use of moving sets, we get to see the Doc climbing the tower and struggling to reconnect the cable as Marty simultaneously drives the DeLorean to hit its mark! How the hell did they do that? Well, it’s a brilliant set-piece, and you’ll just have to see the show to find out how they pulled it off.

Back to the Future – The Musical is a stunning success on every level. The familiar story is brought to life on stage by a superb ensemble cast and some dazzling special effects. Put simply, this is the best stage show that I’ve had the pleasure to experience, and we’ve already booked another set of tickets. Believe me, the show is THAT good. I’m so pleased that I got to see the musical on its opening run in my home city, but I’m equally delighted that the show will be moving to London’s West End because it’s an experience that should be seen by as many people as possible. Hopefully, it will also move onto Broadway and other theatres throughout the world, but before then, don’t miss it at the Manchester Opera House until 17th May.

Rob Campbell is the author of the Wardens of the Black Heart trilogy (Monkey Arkwright, Black Hearts Rising and The Well of Tears). It’s a mystery series that will appeal to fans of 80s films such as Stand By Me and The Goonies or the TV series Stranger Things, where people stumble across strange things in the woods or uncover dark secrets hidden in the abandoned places around a small town.