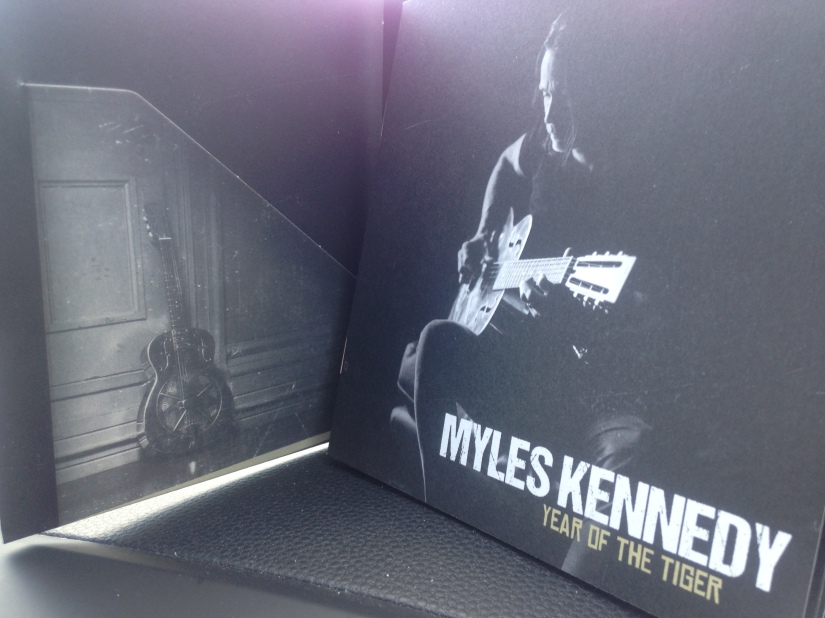 With the World Cup in full swing, writing time is scarce, more so for indie writers with full-time jobs. So, by rights, I should be using any spare time at the keyboard to push on with my second novel. However, I wanted to spend some time looking at an extraordinary new album that I have recently discovered.

Myles Kennedy is a new name to me. He is the lead singer of hard rockers Alter Bridge – a band that I am aware of but have never actually heard any of their material. Despite being well into a career that includes many albums with Alter Bridge, several previous bands and collaborations with Slash from Guns N’ Roses,  Year of the Tiger is his first solo release.

There are a number of aspects to this album that make it such an immersive and rewarding experience, not least of which is a musician at the top of his game, but in order to appreciate the songs fully, it helps if you understand the inspiration behind the album.

Year of the Tiger is a concept album that explores the events that followed the premature death of his biological father: a Christian Scientist whose beliefs led him to refuse medical attention for appendicitis. He died in 1974 – hence the title of the album. It’s largely acoustic-based and has a rootsy sound that is steeped in the Americana-blues tradition of artists such as Robert Johnson. In various interviews, Myles Kennedy also cites Chris Whitley’s Dirt Floor as one of the inspirations for the recording of his album and, as a long-time fan of Chris Whitley, I can see (or rather hear) exactly where he is coming from. Over the course of the twelves songs, Kennedy plays acoustic guitar, banjo, lap steel, mandolin and a National resonator guitar – this last instrument being the weapon of choice for the late-great Whitley.

Then, as if the music wasn’t enough on its own, there’s Kennedy’s exceptional voice. For his solo record, he’s chosen to sing in a lower register than he would for Alter Bridge, and this approach really suits the mood of the music. To me, he sounds a lot like the late Soundgarden frontman, Chris Cornell. When you combine the rootsy sound with that voice singing such heartfelt and deeply personal lyrics, you cannot fail to enjoy this album.

The title track kicks off proceedings. With its acoustic guitar riffs full of foreboding and lyrics that refer to the arrival of a pale horse and a promise to “run a thousand miles beyond this house of pain,” it sets the sombre tone for what is to follow. Next up is “The Great Beyond” – a song that has an impressive string section to underline the nightmarish images conjured by words that speak of a spirit that moves down the hall and answers that will not come. The resonator guitar gets a workout in the atmospheric “Blind Faith”. “This night of reckoning will forever change what’s to come” sings Kennedy before segueing into a rousing chorus.

But despite the subject matter, it’s not a grim listen at all. Several songs are clearly dedicated to the resilience shown by his mother in dealing with the aftermath of his father’s death, and in making the tough choices that were necessary to protect her young family. “Mother knows what must be done/ Fighting for her precious ones,” Kennedy sings in “Mother”. Despite its vivid description of lost sleep and fever dreams, “Haunted by Design” is incredibly catchy and features a jaunty instrumental break. Similarly, although the narrator questions if there is a God, asking “why did he take my father’s soul?” there’s a chipper rockabilly streak running through “Devil on the Wall.”

There’s not one second wasted on this record; every track features one or more superb pieces of musicianship, some evocative lyrics and the production is perfect. It’s not a pure stripped-down acoustic blues album in its truest sense, but neither is it a souped-up rock record – the production places it brilliantly in a centre ground between the two. It is not afraid to add strings or other instruments in support of the music, but you can hear the space between the notes where necessary. The choice of instruments and their place within the mix – whether it’s the resonator guitar or banjo – is just right, allowing the music to sit alongside the vocals, neither one overpowering the other.

They say that you shouldn’t judge a book by its cover, and I guess that’s true of an album, but I have to admit that it was the shot of Myles Kennedy on his resonator guitar that first drew me to Year of the Tiger. It reminded me a lot of Chris Whitley’s masterpiece, Living with the Law – one of my all-time favourite albums. Like Whitley before him, with the wonderfully crafted songs on show here, Myles Kennedy more than earns the right to present that moody album cover as the hook that draws potential listeners to this exceptional album.

View all posts by Rob Campbell